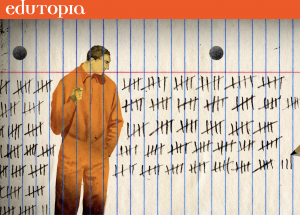 By the time she reached high school, Bianca Lopez had been labeled a “bad student” for talking loudly and talking back in class.

Now an adult reflecting on her years of schooling in Los Angeles, Lopez, 21, said her misbehavior masked the pain and grief she felt after her older brother was sent to prison just shy of her 12th birthday. Lopez remembers carrying the distress of her sibling’s absence to school daily until she attended a lunchtime group for youth impacted by incarceration during her junior year.

Along with the ham sandwiches, she found a sense of belonging and safety among her peers in Pain of the Prison System (POPS), a high school club for teens struggling with family incarceration. When the group handed Lopez a piece of paper and pen to write, she was hesitant at first. But with gentle prodding from the group leader, she started writing a letter to her brother. It was their first communication in over six years.