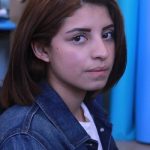 Regardless of the circumstances, what happened last year changed my life for the better. Walking towards the car where my mother was waiting after school on April 25, 2015, the sun felt warm on my shoulders. The sun was shining brightly at 3 o’clock. We drove off, heading to my grandma’s house as we usually did on a Thursday evening.

When we arrived, my mother headed straight to my grandma’s room. She always watched Law and Order when she was not working. I headed towards the kitchen, hungry after not eating at school. I asked my mother if she wanted me to make soup. She said yes. After the soup was warm, I handed it to my mother. We ate in separate rooms–due to the TV channel issue.

Minutes later my aunt and grandma walked in, aimed for the kitchen. I was focused on the channel, my feet kicked up on the coffee table, when I heard a scream from my aunt. “Call 911.” The way her voice cracked made my stomach turn, the way it does when you know nothing good will come after. I made it halfway down the hallway when my aunt blocked my path into the room. 911 was on the phone by that time, I overheard my aunt telling the paramedics why she was calling. I was clueless when she hung up, I needed answers. She calmed down and explained. “Out of nowhere your mom turned pale and is having a hard time taking in air.” At first I convinced myself it was not a big deal. She had visited the ER multiple times, but it was never fatal.

Outside the paramedic’s van was flashing red lights, and they walked in with a gurney. I was in the living room when she was headed outside, accompanied by the paramedics. She was conscious, but her eyes were closed. She was pale as paper, and she definitely did not look well. She was not shaking or making eye contact. In a way she looked ashamed for being in this condition. I fought my way into the ambulance to join her. She looked at me with no clue as to who I was and began to mumble. “Why is this happening to me?”
I did not have an answer. How could I? She looked hopelessly at me, with more confusion than I felt. The feeling was overwhelming. I couldn’t accompany her to the hospital.

I do not regret it. I would not have helped. I couldn’t even begin to imagine what she was feeling. I told her I would see her later, and we left it at that.

I informed my father since he was at work. I knew he would rush straight to the hospital. I did not tell him to pick me up. I don’t do well under difficult circumstances, especially if I can’t do anything to help. It was 11 p.m., and I had not heard from anybody. I was still at my grandma’s house with my grandpa. I had gone to the bathroom more than ten times. What could I say? I was nervous.

I called my father for an update, but each time I heard only the answering machine. Five minutes later I received a text. Deep inside I knew that was not a good sign, but I ignored the feeling. “We will be there in five minutes,” I read. I knew “we” wasn’t him and my mother but him and everybody else.

The door was slowly opening when my three aunts and my father walked in. Red, big, puffy eyes was all I focused on. I knew why. My father told me anyway, and I let him. I needed to hear the words. No tears ran down my face; I was in shock.

I didn’t blame anyone. I understand that we live to die. But man, did it hurt. Mainly because, in addition to her being my mother, she was amazing. I wanted to be like her—to have her personality. She was so different from my father. I will never get over the fact that I was 13 when I lost her. I feel stupid for not getting closer to her when I had the chance.

The evening became even more painful when my brother arrived. He was two hours away, in Santa Barbara. I saw him two full hours after I found out. He knew when I saw him. When I saw him, he brought out the tears that I had been holding in. He moved closer to hug me. I didn’t want to be touched, but his touch was all right. I sat in the same place, same position, as I watched people walk in and out of my grandma’s door. It was 3 a.m.

That day was memorable, and it hurts still to think about it, but it made me realize that everyone has issues and everyone copes differently with their emotions. I want to study psychology, social behavior, including human development. I want to understand how an event can affect a person’s thoughts.

Losing my mother helped me appreciate the people I choose to surround myself with. Don’t get me wrong, the sorrow hits me at random times, but I know it all happened for a reason.

About the Author: Nichole Landaverde